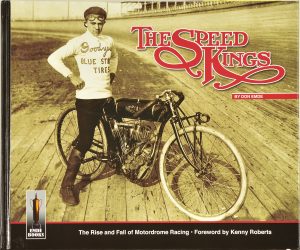 The Speed Kings is an impressive piece of printing. Size 12×10 landscape, with 372 pages, cardinal red endsheets and four-color process throughout, it stands out. The cover features a decades-old photo of a young man sitting on a motorbike and staring intensely at the photographer. More than 600 illustrations are used in the book, and almost every page features a historic photo, newspaper clipping or illustration from the time period.

Emde did the writing and design work himself. Walsworth sales rep Steve Berg said he would wake up early in the morning to do his work. He paid attention to every detail – for example, Emde chose 80 pound paper for this book because he worried 100 pound would be too heavy in such a large book. This is the first project Emde printed with Walsworth.

“He’s a very nice guy. We got to talking and he asked me about books. The truth of the matter is, he knows he could have printed this book anywhere, but it’s important to him and his readers that it’s made in America,” said Berg.

The Speed Kings chronicles the history of motordrome racing in America, a type of motorcycle racing practiced mostly at the beginning of the 20th century. It was extremely fast-paced and dangerous, done on board tracks that were typically less than a mile long. Racers could exceed 90 miles per hour on these steep wooden structures, steering vehicles that didn’t have brakes. Emde traced the rise of the bicycle and motorcycle in America, leading up to the first motordrome races in 1909, through to the demise of the sport and the final race held in 1928. He used photos and newspaper records from the time for many sources.

It could be said that Emde has racing in his blood. His grandfather ran a motorcycle repair shop more than 100 years ago, the became a motorcycle patrol officer. His father, Floyd Emde, competed in motorcycle races across the country in the 1940s and won the Daytona 200 in 1948. Don Emde followed in his father’s footsteps, also winning the Daytona 200 in 1972. Both Floyd Emde and Don Emde, along with Don’s brother, David Emde, have been inducted into the AMA Motorcycle Hall of Fame.

The MPG Awards were announced at a ceremony Sunday, Feb. 23, 2020, at the iconic Petersen Automotive Museum in downtown Los Angeles, California. In addition to the book category won by The Speed Kings, Best of the Year winners were announced in six other categories, including photography, audio programming, video review, feature video, feature article and The Dean Batchelor Award for Excellence in Automotive Journalism.

MPG describes their awards as “a yearly celebration of excellence” with the intent “to inspire automotive journalists, both present and future, to produce work of the highest professional caliber.”

Thank you, Don Emde, for choosing to work with Walsworth! We’re honored to have been the printer for such a beautiful book. Congratulations on your MPG Award!

Anyone looking to order their own copy of The Speed Kings can find it at emdebooks.com.